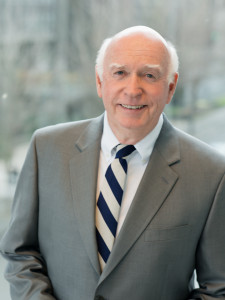 With over 30 years of experience as a litigation attorney, Tom Collins has served as defense counsel for individuals and companies in counties across Washington State. His practice areas include the defense of lawsuits involving claims of product liability, premises liability, construction site injuries, construction defect, civil rights violations, fire loss, government liability, trucking and transportation, and general casualty actions. He is admitted to practice before all State and Federal Courts in Washington as well as the United States Court of Appeals for the Ninth Circuit, and the United States Supreme Court. In addition, he has been admitted pro hac vice and has defended cases in the States of Nevada and Oregon.

Mr. Collins received his A.B. from the University of Notre Dame and his J.D. from the University of Washington School of Law. He served in the United States Army for two years, was appointed a Special Assistant Attorney General of Washington State, and has served as pro tem judge for the King County Superior Court. He is currently a member of the American Board of Trial Advocates, Washington Defense Trial Lawyers, and the Federation of Defense & Corporate Counsel.

Mr. Collins has given presentations on trial tactics for the Washington State Trial Lawyers, the Seattle University School of Law, and ALFA International. He is on the Steering Committee of the Transportation Practice Group of ALFA International, a global legal network of independent law firms with offices located worldwide. Mr. Collins has been selected as a “Super Lawyer” by Washington Law & Politics magazine and is AV-rated by Martindale-Hubbell.

Tom is an enthusiastic traveler and reader of history in his spare time.